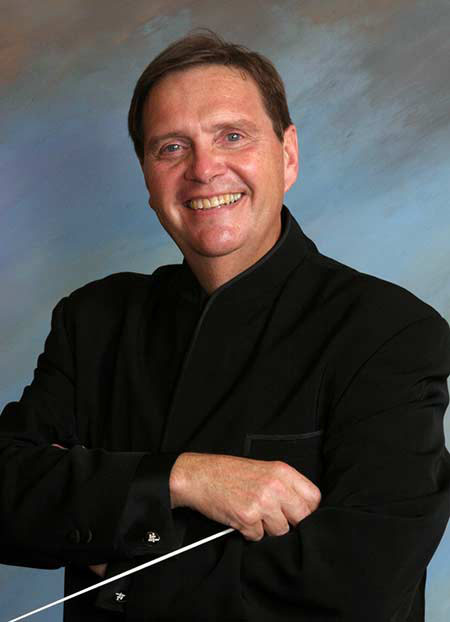 The award winning Music Director/Conductor Dr. Allan Dennis returns to lead the Kankakee Valley Symphony Orchestra (KVSO) for his 31th season. Dennis has been recognized as the 2001 Music Director of the Year by the Illinois Council of Orchestras, as well as awarded the 2001 Heidi Castleman Award by Chamber Music America. The Castleman Award is given to one recipient from the United States in recognition for “excellence in chamber music teaching.”

He has studied at the internationally renowned Tanglewood Institute in Lennox (MA) in 2000 and in 1996, and was also chosen as both an Active Conductor at the Festival at Sandpoint (ID), and a Fellow at the Conductors’ Institute in South Carolina. Dennis also has extensive experience conducting musical shows, operas and ballets.

As an accomplished and multi-talented double bass player, he has performed as a soloist and orchestra member with the Albany Symphony, Cedar Rapids Symphony, and Madison Symphony, and accompanied prestigious celebrities including Bob Hope, Red Skelton, Liberace and John Denver.

Along with being the Music Director of the KVSO, Dennis is also the Director of Midwest Young Artists (MYA) located in the Old Stockade at Fort Sheridan. A visionary, Dennis founded MYA in 1993 with only 50 students, and has built it into the leading youth-music ensemble program in the Midwest.

Dennis received his doctorate with distinction from Indiana University. For his undergraduate and graduate studies, he attended the State University of New York at Fredonia. In addition, Dennis has studied at the Eastman School of Music and received a performer’s certificate from the Royal Flemish Conservatory of Music in Antwerp, Belgium. He studied conducting with the renowned Gunther Schuller, Harold Farbermann, and David Effron.

He currently serves as President of the Board of Directors for the Illinois Council of Orchestras.